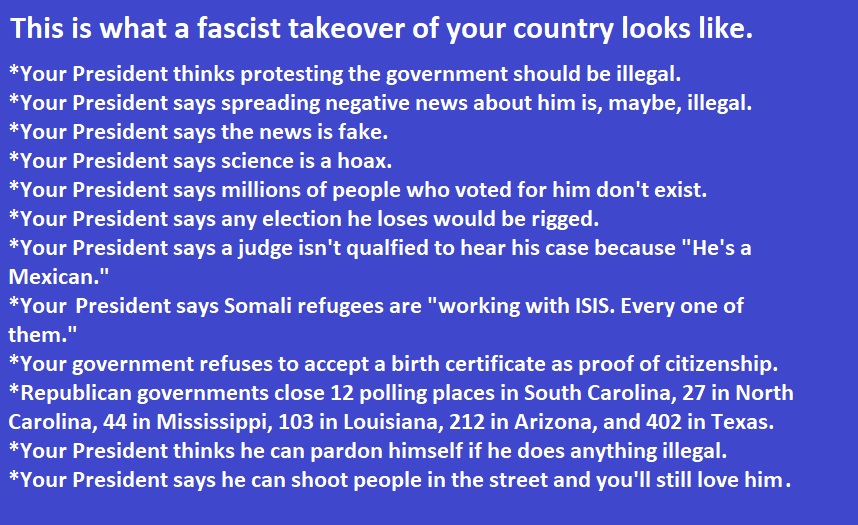 How can they make a Trolls movie without Leslie Jones?

"Let's do it Mormon missionary style!"
"How's that?"
"They go from one door to another."

1. Trump held a bizarre news conference in an attempt to dispute the easily verifiable fact that Trump Steaks had gone out of business years earlier. Trump proudly displayed a pile of what he described as “delicious Trump steaks.” In fact they were steaks from a local butcher. They didn't even bother taking the stickers off the meat. This is the most blatant example of how brazenly Trump lies, refuses to acknowledge that what he says is demonstrably untrue, doubles down on the lie...and how lazy the media is at calling him out on it.

2. On his Sterling, Va. golf course, Trump erected a plaque that reads: “Many great American soldiers, both of the North and South, died at this spot. The casualties were so great that the water would turn red and thus became known as ‘The River of Blood.’ ” Only problem: This never happened. Confronted with the actual facts, Trump's reply was: “That was a prime site for river crossings. So, if people are crossing the river, and you happen to be in a civil war, I would say that people were shot — a lot of them.” That's a key insight into the workings of Trump's mind: If Trump says something
makes sense to him, that's more important than the fact that it never happened.

3. “It has not been easy for me," Trump has said. "And you know I started off in Brooklyn, my father gave me a small loan of a million dollars.” Trump's father did in fact provide a million dollar loan to help repay draws on a line of credit he'd arranged for his son for his first deal, building the Grand Hyatt hotel in 1978. But Donald was essentially a front man on this project for his dad, Fred Trump, who (jointly with Hyatt) guaranteed the $70 million dollar construction loan and assumed 50% of the obligation if Donald was unable to complete it. (That same year, Donald received $47,200 from a trust his dad had established in 1976; by 1981 it was paying him $214,605 a year.) A document from the Casino Control Commission lists several other loans Fred Trump had made to his son, including a $7.5 million loan that was still outstanding in 1981. Trump admitted in a 2007 deposition he had borrowed against his inheritance, “like in the $9 million range.” Most important, Fred Trump's political connections are considered crucial to the tax-abatement arrangement that made the deal practical: Donald sold the property to New York's Urban Development Corporation for a dollar and leased it back tax-free for forty years, effectively saving him hundreds of millions of dollars. This laid the groundwork for Trump's history of making real-estate deals at the expense of taxpayers, including most recently a $40 million tax credit for a D.C. hotel project.

4. Trump likes to paint himself as a successful businessman, but his resume is littered with failed businesses. His Atlantic City casinos lost money every year, even when other casinos in town were thriving. Trump launched a publicly traded company to acquire a new casino, then saddled its shareholders with billions in debt by selling it his two already-failing casinos. Trump kept the business afloat in part with what casino regulators later determined were illegal loans.The company went to bankruptcy court four times, and a fifth time after the shareholders finally had enough and kicked him off the board. Trump Shuttle never showed a profit and was acquired by creditors in 1990.

Even while his businesses flopped, Trump did make money from them, paying himself millions in salary and bonuses while shareholders lost billions. Even so, in 1991, Trump was $900 million in debt, and lost his 282-foot yacht to creditors; it was sold to a Saudi prince, who also took over the controlling interest in the Trump plaza when Donald was unable to make debt payments in 1995. Critics argue in the long run Trump would have made as much money or more simply investing his inheritance in mutual funds.

Trump didn't even run many of the businesses that bore his name but merely licensed his named to entrepeneurs like Trump Steaks, Trump Vodka and, perhaps most infamously, Trump University.

5. Trump University's ads claimed Trump had “hand-picked” its instructors, and quoted Donald as saying “I can turn anyone into a successful real estate investor, including you.” In fact, according to court affidavits, Trump University wasn't a university; Trump didn't hand-pick instructors, and didn't attend any of the three-day seminars; the courses were generic third-party real-estate seminars like you see pitched all the time on late-night infomercials; and their real purpose was to pitch advanced “mentorship” programs for up to $35,000.

7. Trump famously said: "Hey, I watched when the World Trade Center came tumbling down. And I watched in Jersey City, New Jersey, where thousands and thousands of people were cheering as that building was coming down. Thousands of people were cheering.” Trump has repeated these claims despite abundant evidence that no such scenes were ever broadcast, or ever happened. He even used the occasion of the Orlando Pulse nightclub shooting for a self-congratulatory tweet that it “proved he was right” about the Muslim celebrations.

Here in Mobile the temperature is a record near-80 and the dew point is a hangover from last July.

Guess Ted Cruz needs to find another way to lie about the global warming data this year. Merry Christmas, Ted!

But the most comprehensive list of movies leaving Netflix Instant on December 1st is definitely right here.

I happened to be checking something on my Shop Your Way page and discovered a message that they'd loaded $11.00 worth of points on my account to be spent at KMart, and expiring tomorrow. So I talked my dad and sister into driving to that side of town for our regular Tuesday lunch excursion and dropping by the KMart afterwards. I couldn't believe my luck when I found they had black jeans on sale for $10.99. I'd quite forgotten that I'd thrown out my last pair of black jeans after the thighs became 100 percent fray.

So when I got home I checked and found that, yeah, the $11.00 credit was on an entirely different account number. But I hated to pass up free jeans, so I printed out my membership card, drove back to the KMart and picked up those free jeans. They didn't even charge me sales tax! That's a big deal in Mobile, where the sales tax is like ten percent and they charge it on everything, groceries included. They even threw in a bunch of coupons for my next visit! But the heck with that, I'll wait until they give me more free money.

In other news, the coupon for a free bottle of Old Orchard juice that I signed up for on-line finally showed up in my mailbox, but KMart doesn't stock it.

I won a $5 Amazon gift card, which gave me enough in my account to order an Amazon Fire Stick with free shipping. Now I'll finally be able to watch the movies I keep writing about!

I generally start my holiday shopping around the time I hear hooves clattering on my rooftop.

Worth watching for the cameo by The Shadows, if nothing else.

But holy crap, that Lady Penelope is one bloodthirsty dame.
Collapse